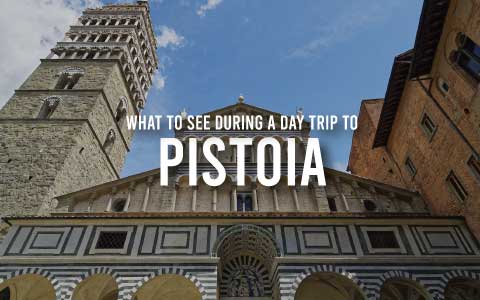 WHAT TO SEE DURING A DAY TRIP TO PISTOIA

I’m sure that If I say Tuscany you immediately think of Florence. But this beautiful region of Italy has plenty of villages and towns that deserve a visit. One of these is Pistoia.

A BRIEF PRESENTATION OF PISTOIA

Pistoia is located exactly halfway between Florence and Lucca. It’s a city of Roman origin, quite small but dotted with numerous fine buildings. This is the reason why it’s called the city of enchanted stone or the city of wide streets and beautiful churches.

However, this beauty is not confined inside the urban perimeter but also outside, where the wonderful Tuscan countryside stretches with its rolling hills, the lonely cypresses and medieval castles in the distance.

WHAT TO SEE IN PISTOIA

The best way to explore Pistoia is to wear your best sneakers and get lost in the streets of its historic center.

The Duomo of Pistoia dates back to the 10th century, but the seven-arched portico and three doorways were completed only in 1311.

The main arch of the portico is the most decorated part, with panels of majolica on the vaulting and glazed terra-cotta relief on the lunette.

At the left of the Cathedral is the 67 meters high campanile, built on what once probably was a Lombard watch-tower.
It is possible to climb it to the top. It takes 200 steps, but the view of Pistoia is worth it.

In front of the Cathedral is the ancient Baptistery of San Giovanni in Corte, which facades are decorated with bands of white and green marble typical of other historical building in Tuscany.

In Piazza del Duomo is also the Palazzo del Comune, begun in 1294 but completed only in 1385.
Looking at the facade you may notice a mysterious black marble head to the left of the central window. Nobody knows its meaning.
Inside the building is the Municipal Museum which collects paintings, frescoes, and pictures from the 13th to 18th centuries.

From Piazza del Duomo you can reach Piazza Giovanni XXIII, where the ancient Ospedale del Ceppo is located.
Founded in the 13th century, this former hospital was a reference point during an epidemic of the black plague that hit Pistoia in 1349.  Its name comes from the ceppo, an offering-box used to collect alms for the poor and sick. The main feature of the building is the vivid polychrome majolica frieze.

Although it is not possible to visit the inside, part of its ancient basement is open to the public.  During the tour you can explore the tunnels, see the foundations and one of Italy’s oldest surgical amphitheaters, used to teach anatomy to the 15th-century medical students.

Pistoia is a lively city and you can feel it in Piazza della Sala. This is where the city market, the shops, but also the bars and restaurants where people meet, drink and eat are located.

WHAT TO EAT IN PISTOIA

There are many typical products and dishes to suggest, such as the Tuscan bread, the pecorino cheese, the finocchiona salami and the ‘confetti’ candies. However, the typical dish of Pistoia is zuppa del carcerato, the prisoner’s soup.
It’s a very simple dish, with stale bread, veal entrails, cheese, butter and meat broth.
Its name derives from the fact that, a long time ago, it was cooked for the prisoners of the city prison which, even today, is located near the slaughterhouses.

Do you want to visit Pistoia?

Discover our luxury villas in Tuscany

our luxury villas in Tuscany

Easter in Tuscany, where to go and what to see